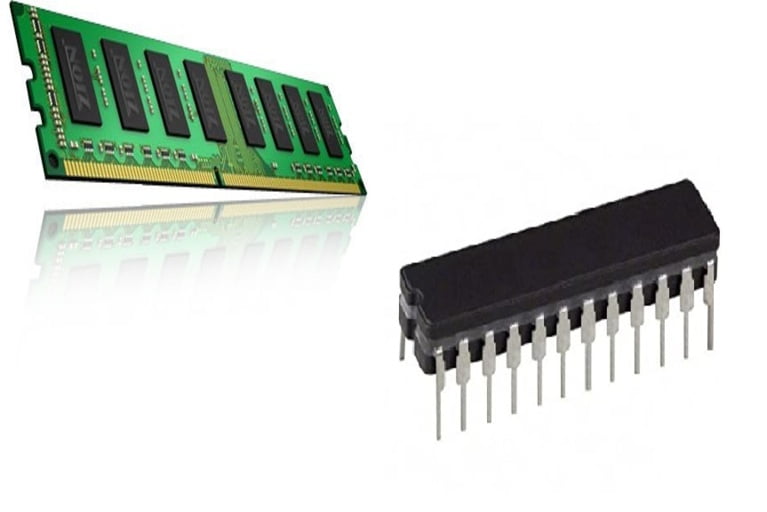 Static RAM or SRAM is a random-access memory (RAM) that retains the data bits in memory until power is removed. Contrary to the Dynamic RAM or DRAM, which utilizes cells consisting of a capacitor and a transistor to store bits in.

SRAM is much more powerful and does not have to be periodically refreshed. It provides faster access to data and is more expensive than Dynamic RAM. Static RAM is used for a computer’s cache memory or as part of a video card’s random-access memory digital-to-analogue converter.

The structures of both equipment Fairly account for its main characteristics. Furthermore, they are also the reason behind their respective pros and cons. For an in-depth explanation of how DRAM and SRAM work, Let’s begin with DRAM Analysis,

DRAM or Dynamic Ram works on DRAM Chips that hold one bit of data. It is composed of a transistor and a capacitor. This is combinedly also known as one memory cell. The work of the transistor is to allow or control the circuitry on the memory chip to read it or change the state of the capacitor, while the capacitor is responsible for holding the Information bit in the form of 1 or 0.

Precisely, the capacitor is a container that stores the electrons. A container full of electrons resembles the 1 bit, while the container empty of electrons designates a 0. However, in time, the capacitors usually have leakage that causes them to lose their charge, subsequently making the “container” empty after just a few milliseconds. This leads to a prevalent recurring issue.

Hence, The Capacitor within the DRAM chip must be recharged with the help of the CPU or memory controller before they entirely run out of juice in order to retain data.

In order to do the same, the CPU reads the data and then redo the filling of all the capacitors with electrons. This whole process is summed up in the word refreshing. Refreshing occurs at the frequency of thousands of times per second in any DRAM chip. This is the reason behind the word “Dynamic” in the Dynamic RAM. Dynamic basically refers to the necessary refreshing to retain the data.

However, the need to constantly refresh data makes the DRAM slower.

The Static RAM, which relies on flip-flops, is one of two stable states in RAM that support circuitry. Each state can be read as 1 and 0, respectively. A flip-flop usually requires six transistors. Moreover, it has the advantage over DRAM as it does not necessary to be refreshed. This sleek ability also makes the SRAM faster than DRAM.

Contrary to the above, SRAM cells can take up more space on a chip than a DRAM. It happens due to the need for more parts and wiring in SRAM. This also makes the SRAM more expensive than DRAM. Furthermore, SRAMs are harder to manufacture as well.

When it falls to the speed of each device, SRAM is typically faster as it doesn’t require any refreshes in comparison to dram. To put them in numbers, the average access time of DRAM is about sixty nanoseconds, while the SRAM can give the same access at as low as ten nanoseconds.

Capacity and Density largely depend upon the built in structure of the devices. The ratio between SRAM and DRAM is 6:1 as SRAM needs six transistors than DRAM to store the respective data and a DRAM module only requires one transistor and one capacitor to store every bit of data. Since the number of transistors in a module determines the capacity of the device as well, The capacity part also play on ratio of 6:1 for the same number of transistors, the SRAM module can have up to 6 times more capacity than an DRAM module.

In general, a SRAM module comparatively consumes less power than a DRAM module. This happens because the SRAM only requires a small amount of steady current while the DRAM requires no of  bursts of power every few milliseconds in order to refresh. This amount of current utilised to refresh is several orders of magnitude greater than the low SRAM standby current.

Hence, SRAM are generally utilised in portable and battery-operated equipment.

The power consumption of static RAM does depend on the frequency at which it is being accessed. When the device is used at a slower pace, it draws negligible power. However, at higher frequencies, SRAM consumes as much power as the DRAM.